LadyG is a little overwhelmed with responsibilities right now and so, like the grown-up she purports to be, she needs to take another week off from srs blogging.

In the meantime, meet Charlotte Corday, an alter-ego born of frustration with societal stupidity and general backwardness.   After all, if Christina can be Count Dohna sometimes, why can’t a Lady also be a Revolutionary?

LadyG believes in effecting change from the inside: calmly, carefully, deadly.    A Hufflepuff with Slytherin ambitions, if you will.

Charlotte believes that the inside is ROTTEN and BROKEN and WHO CARES ABOUT FIXING IT LET’S JUST DESTROY IT.   Obviously Gryffindor through-and-through.

LadyG believes in reasoning with opponents until they prove themselves unwilling to listen.  (re: the original FB argument, not the awesome WordPress discussion)

Charlotte gets all TigerBeatdown ON YOUR FACE.

LadyG carefully investigates claims of misogyny and sexism because she thinks straight white men are also done a horrible disservice by gender stereotypes.

Charlotte has this to say: 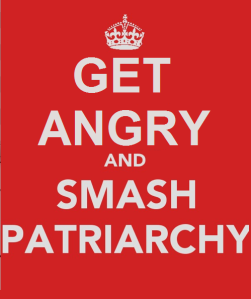 (Charlotte has been listening to a lot of Paramore this week, and she has no regrets.)

LadyG is working on a music video analysis involving gender performance, but she can’t promise when it will show up.   Would you like to see content from Charlotte sometimes?    Vote in the comments!

My Internet name is LadyGodiva and I like big words.   Friends and fellow Internet citizens call me Lady G; trolls should please address me by my complete title: Godiva, Countess of Mercia (Emmy excepted).   Normally on the Internet I have a fast-and-loose attitude towards capitalization, but for the sake of your eyes I will adopt standard English conventions here.    I recently graduated from the Midwestern college that my compatriots currently attend, and I continue to reside relatively nearby, albeit in a very, very different neighborhood.   I hope to find a way to blog about the cultural and demographic shift I’ve encountered upon moving without revealing too much about myself.