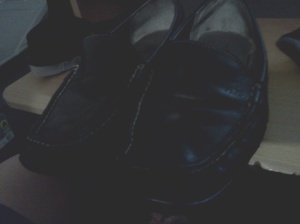 Today I polished my shoes, per Day 2’s recommendation. I used Kiwi’s express Shine Sponge and some spit. My memories related to polishing shoes go all the way back to watching my dad meticulously shine not just his shoes, but mine, my mom’s, and my sister’s shoes when I was in grade school, usually in the mornings while he was in a hurry to go to work. I associate shoe polishing with my dad, and also with a part of a meticulous morning regimen that I see so many men do as a way of getting ready for the day that I’ve always wanted to adopt.   I also remember having to shine my shoes in high school when I was in marching band, according to marine standards for parades. This eventually inspired me to start shining my shoes in high school, when I got to wear a pretty uniform with it. However, in college, I stopped, even though my Dad has mailed me case after case of shine sponge. Well, Dad, I’m using it today! Tomorrow I will wear them to an Iftar dinner hosted in a synagogue (whadya know), along with some nice looking outfit. Hopefully I’ll keep polishing my shoes in the future.

Whether it’s shining shoes, reading the paper, going to the gym, or going to the synagogue to pray, it seems like most men I respect have some way to seize the day bright and early. I’ve slept in until 11AM the past two days :(. Me aside, I notice that many  women’s mornings look (much different). Often it’s spent getting the kids ready for school, making coffee for Mr. Soandso to take on the commute or to sip during his morning newspaper ritual. To my Dad’s credit he _always_ helped me get ready to go to school, maybe because my lazy ass took _two_ parents to drag out of bed and get my hair brushed and fed, but both of my parents worked, so, I guess leaving it to my mom would have been unfair. There is still an implicit (or explicit division) of labor in some cases, and e with this there is a division of opportunity or encouragement to develop morning habits that help many guys use to face the day ahead of them. One way in which I see this most clearly is in religious communal life in Judaism, in which men are obligated to get up every morning, don ritual garments, and pray in a group of fellow men to start the day. Women are excused from the latter, and in many cases legally and socially prohibited from the former. Enforcement can range from being subtly ostracized to being beaten on a bus by some whacko. That is an extreme case, however and the practices of shoe shining, going to the gym, etc. are much less fraught with emotional and social controversy. My hope is that someday the division of labor will change, not just practically, but socially in order to provide women more opportunities to pursue morning rituals.   From my experience though, in waging the war against the embrace of the pillow in order to make it to shul at 7:30AM, the gym at 6AM, or even class at 9AM, old habits die young.

STOP THE PRESSES: Cranky, sharp as ever, has just informed me that women actually do have a morning ritual. It’s called putting on makeup or something like that “Put your face on.” Damnit. sdlkja;sdklgj. I never wear makeup and it does not appeal to me at all, but like, good point, Cranky. Good point. Feel free to disregard my overgeneralizations, but I still stand by the main spirit of what I’m saying.